Contact the Senate Commerce Committee and ask them to vote YES on SB1024 in support of local action on smokefree air!

This coalition of musicians, public health partners, and businesses has come together to encourage Tennessee to go smokefree inside its music venues and bars. They even have a theme song to inspire you today.

More Support for a Smokefree Tennessee

The Predators and The Titans

Tennessee is a state that preempts municipalities from adopting local smokefree laws. In 2007, a weak statewide smokefree law went into effect that exempts small workplaces with 4 or fewer employees, as well as restaurants and bars prohibiting entry for those 21 and under, creating dramatic gaps in smokefree protections. Many workers across the state, particularly musicians, are left without protections from secondhand smoke exposure in their workplaces.

A new coalition made up of musicians and others in the music industry, ‘Musicians for a Smokefree Nashville,’ was created in September 2020 with a goal of making Nashville a Smokefree music city, one music venue at a time. As a result of very coordinated outreach and education, a new and expanded effort for a Smokefree Tennessee was launched.

Numerous business and public health partners have signed onto these smokefree efforts. In a statement released last week, Bridgestone Arena, home of the NHL Predators team, is becoming an entirely smokefree and vape-free property. The news follows a similar endorsement and new smokefree policy from the Titans NFL Team  and Nissan Stadium this past fall.

It will be an uphill battle to overcome decades of preemption, but there is a great deal of support and enthusiasm for making Tennessee a smokefree state. Lend your support by signing up for updates at https://smokefreenashville.com/.

Musicians for a Smokefree Nashville

In the fall of 2020, Musicians for a Smokefree Nashville formed to highlight the need for smokefree protections for entertainers, fans, and venue staff in one of America’s premiere live music cities.
The coalition has received the endorsement of some seriously HUGE organizations, including Nashville's two largest venues, Nissan Stadium and Bridgestone Arena, and the Titans NFL Football Team and Predators NHL Team, who call those venues home. Ryman Hospitality and it's iconic venues the Grand Ole Opry, Ryman Auditorium, Wildhorse Saloon, and Blake Shelton's Ole Red have also thrown their support behind the movement. To get involved and support this project to protect everyone in this special music city, sign the petition!

The state of Tennessee preempts municipalities from being able to implement 100% smokefree laws at the local level and as a result, the gap widens and millions of people remain exposed to toxic secondhand smoke at work.

Musicians for a Smokefree Nashville

WHAT MUSICIANS ARE SAYING 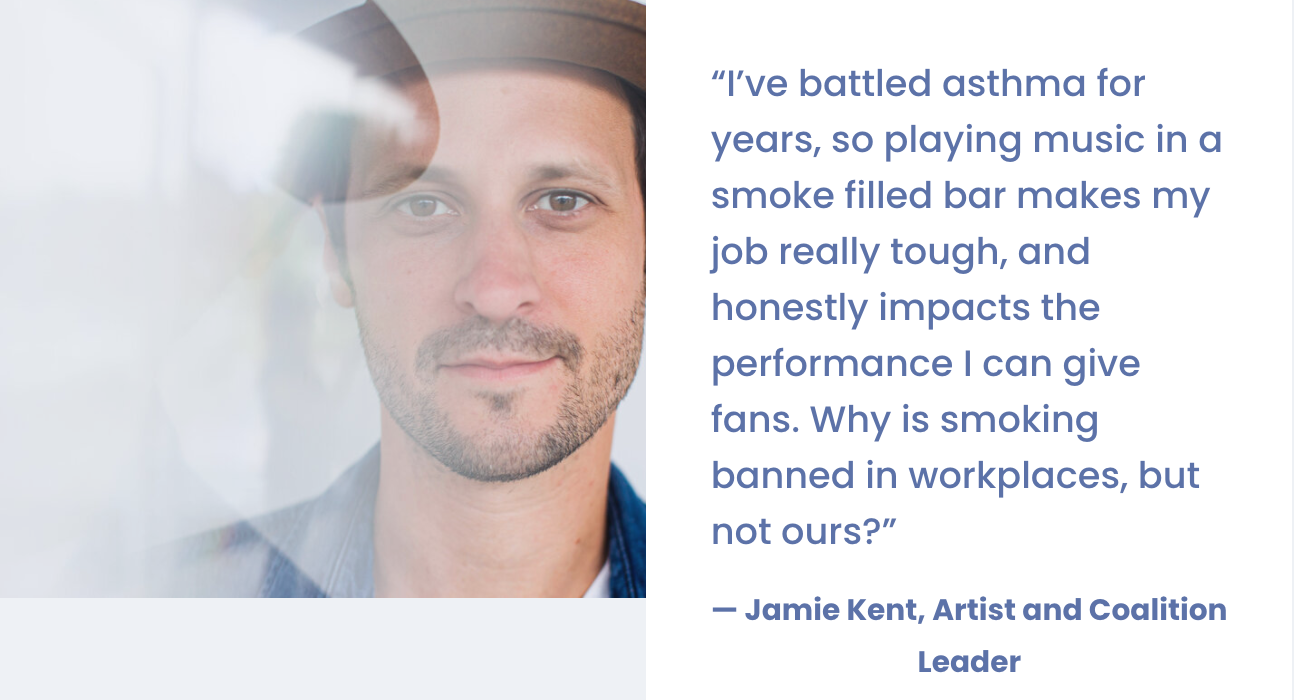