30 Years Ago We Did the Impossible

Smokefree Airplanes: They Said it Would Never Happen

February 25, 2020, marks the 30 year anniversary of this important public health achievement made possible by a broad coalition of health groups, legislative champions Senator Lautenberg and Senator Durbin (then Rep. Durbin), and tenacious flight attendants who were willing to speak up publicly for their right to breathe. See Senator Durbin’s remarks on the 25th anniversary.

Flight attendants and other airplane crew members were regularly subjected to toxic secondhand smoke. Hear what veteran flight attendants have to say about working on smoke-filled flights then and their smokefree workplaces now. Watch Patty Young, one of the early voices in the fight, describe what it was like to work in a smoke-filled airplane.

We can’t help but note: Patty’s impassioned speech about her right to smokefree air still applies today for many classes of workers in hospitality workplaces that are left behind. We fought for years in an uphill battle to protect the health of flight attendants and passengers, and today we remain committed to smokefree advocacy, to close the gaps in smokefree protections for musicians, casino workers, bar and hospitality staff who still work in smoke-filled environments. While we have much to celebrate, there is still more work ahead of us.

We want to close the gaps in smokefree protections for ALL workers! 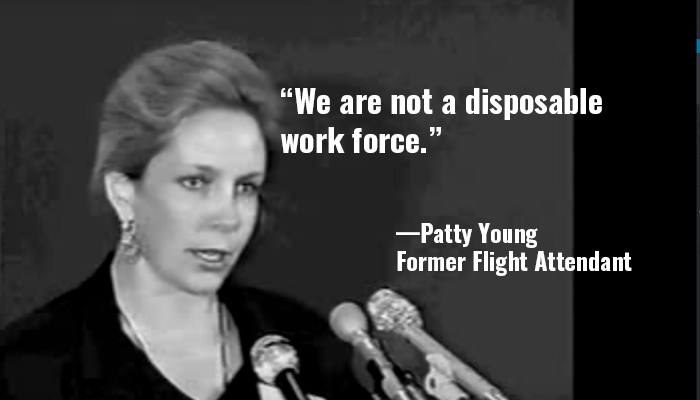 Why Aren't All Workers Protected?

The tobacco industry maintains that smoking sections inside a building like a casino, or smoking rooms in a hotel, are a way to control smoke. We know that smoking sections do not protect people from the health hazards of secondhand smoke. Smoke drifts and ventilation doesn’t remove toxins. There is no HVAC system that can remove the cancer causing elements in secondhand smoke or vapor from an e-cigarette.

Everyone has to breathe at work! We all need clean indoor air to be healthy.

Do you remember what it was like to travel on an airplane filled with cigarette smoke? Let us know about your experiences.

Kimberly
"Having to breathe and work in that environment is grueling."

Flight attendant Kimberly Winston describes the difficulties and health problems of working in smoke-filled airplane cabins, as well as her delight and relief that airplanes have now been smokefree for thirty years.

Deborah
"I'm a supporter of smokefree rights for all."

Patty
"We are not a disposable work force."

Big Tobacco and its allies fought for decades to keep smoking on airplanes, despite the staggering toll of death and disease to flight attendants caused by secondhand smoke. Patty Young's speech addressed the trauma of working in a smoke-filled environment.

I will be forever grateful to ANR for their comprehensive and generous support over decades to help the flight attendants get smoking off of all flights. I started and led the fight to ban smoking in the summer of 1966 when I became a stewardess. I immediately was told by my many of my non-smoking co-workers that their doctors had told them that they had the lungs of smokers. These statements and the gargantuan amount of tobacco smoke on every flight that we were breathing in made it obvious to me that things were dangerous and suffocating in our workplace and that something had to be done about it. Our flight attendant fight to ban smoking was a long and difficult road that resulted in many sicknesses, diseases, deaths and disabilities for our flight attendants. But on the positive side, our fight also led to the modern day worldwide non-smoking movement. Thank you from the bottom of my heart ANR for being there and knowing what it was that we were suffering from and for going to great lengths for us and the passengers to help make smoke-free flying.

My name is Lori Andrews and I have been a flight attendant with American Airlines for 30 years. 27 years ago, I joined ANR in the fight against big tobacco. I spent a week in Washington D.C. with ANR and an amazing group of fellow flight attendants (notably Patty Young) meeting with law-makers and submitting testimony on the effects of 2ndhand smoke on airline personnel. It seemed like an uphill battle, but we triumphed. It will always be one of the most rewarding experiences of my life. Thank you, ANR, for supporting us on our fight to work in a smokefree environment.

The federal law for smokefree airplanes was preceded by a 1987 California law sponsored by then Senator Nicholas (Nick) Petris. The law made all in-state flights in California smokefree (i.e. flying from San Francisco to San Diego). This showed that this was possible and helped move the Federal effort forward.

ANR presented CA Senator Petris with its Smokefree Hero Award for his sponsorship of the landmark smokefree transportation legislation.

Smokefree Skies — For health of flight crews for generations to come

THE AIRLINE SMOKING BAN: FROM LOCAL SUCCESS TO A NATIONAL MOVEMENT

Salt Lake City International Airport (a major Delta Airlines hub) is finally phasing out all its indoor smoking areas and will be 100% smokefree indoors by the end of 2016. This is a major victory given the decades of tobacco industry pressure to keep indoor smoking.

“This is first and foremost an issue of public health, both for travelers and our airport employees, but it is also an issue of space concerns,” said Mayor Biskupski, on the closure plan. “The current airport terminal is also beyond capacity, and every foot of available space should be used to the best advantage of the traveling public.”

A thunderous round of applause went through the ANR offices on May 4, 2016.

Why all the excitement? Because Governor Jerry Brown had just signed a bill for which ANR advocates had been fighting for more than two decades.

The landmark 1994 California smokefree law, among other things, was the first state law to include bars, but it also included significant exemptions, which left many workers breathing secondhand smoke on the job for the last 22 years. Local communities have always led the way in smokefree air protections, and 116 California cities and counties adopted strong laws that do not contain the workplace exemptions in the state law. The new strengthened statewide law closed most of those exemptions. California workers are now able to breathe easy in businesses with five or fewer employees, employee break rooms, warehouses, hotel lobbies, and owner-operated businesses.

In addition to strengthening the smokefree workplace law, the new 2016 laws define e-cigarettes and other electronic smoking devices as tobacco products and prohibit their use in smokefree spaces, increase the tobacco products sales age from 18 to 21, require charter schools in addition to other K-12 schools to have tobacco-free campuses, and establish an annual tobacco retailer licensing fee.

Tobacco industry lobbyists fought hard against these bills, but the bill sponsors and advocates did not give up and the Governor took this monumental opportunity to save lives in California. Governor Brown’s action put the health of Californians above tobacco industry profits. We applaud the state legislature and Governor for finally extending these important public health protections statewide.

Since the passage of these state laws, California communities have continued to lead the way by adopting local laws for smokefree multi-unit housing and outdoor public places, and prohibiting the sale of menthol cigarettes and other flavored tobacco products.

"We are One"- Smokefree NOLA!

The Good Times Have Been Rolling In Smokefree New Orleans!

On April 22, 2015, the City of New Orleans joined the ranks of world-class cities with a strong smokefree indoor air law! The law covers all hospitality workplaces such as restaurants, bars, casinos, and hotels.

Thanks to all the ANR members and friends who responded to our action alerts by sharing your support for smokefree air with the city.

It has been a long road to the life-saving smokefree NOLA law. ANR began working with advocates in the city in 2003. The law is already inspiring other cities to follow suit. 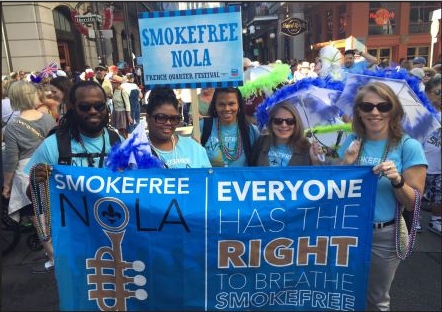