Atlantic City, NJ— Less than a year after writing a memo to employees announcing it would end indoor smoking "out of concern for the health and well-being of our Team Members and Guests," Mount Airy Casino has brought back indoor smoking -- even as independent analysis shows financial success for the casino during the period when it did not permit guests to light up indoors.

"This is exactly why we need state laws that permanently close casino smoking loopholes -- so that casino workers' health is not subject to the whims of their bosses," said Cynthia Hallett, ANR president and CEO. "Mount Airy's supposed commitment to protecting their employees' and guests' health and well-being was just empty rhetoric, and their refusal to provide an explanation shows they are clearly not proud of this decision. We urge Mount Airy to reinstitute their smokefree indoor policy immediately."

Play Pennsylvania reported today that when Mount Airy announced the return of indoor smoking on its Facebook page, it took the unusual step of preventing comments (every other post allows comments): 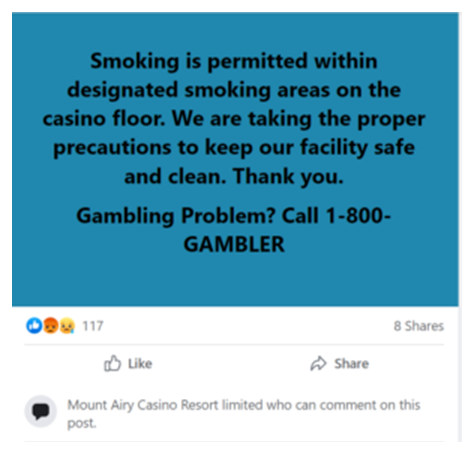 Further, Mount Airy has refused to answer multiple reporter requests for an explanation on the policy change.

Last month, ANR submitted comments to the Pennsylvania Gaming Control Board as it considered the renewal of Mount Airy's license. The comments highlighted indoor smoking after Mount Airy performed better than their non-smoking counterparts while providing a smokefree experience for workers and guests. According to a new study published by the Las Vegas-based C3 Gaming, when Pennsylvania lifted the state-wide smoking ban, Mount Airy opted to remain smokefree indoors and experienced an increase in revenue, from July 2021 through February 2022, compared to pre-pandemic levels. During that period, its closest competitor, Mohegan Pocono, reverted to allow smoking indoors and saw a nearly 2% drop in revenue compared to pre-pandemic levels.

Meanwhile, Parx and Rivers Philadelphia, two of the largest properties in the Commonwealth, continue to operate voluntarily smokefree. Play Pennsylvania reported earlier this month Parx Casino in Bensalem has again posted the highest revenue figures among all casinos in Pennsylvania, even as Parx opted to remain smokefree indoors after the state lifted pandemic-induced policies last year. The C3 Gaming report shows conventional wisdom about the economic impact of going smokefree indoors has been flipped, pointing to new data that shows smokefree casinos, such as Parx, are outperforming their competitors that allow smoking indoors.

Two weeks ago, the National Indian Gaming Commission announced that Tribal casinos generated a record-setting $39 billion in 2021 – all while more than 160 Tribal casinos operated smokefree indoors.

ABOUT AMERICANS FOR NONSMOKERS' RIGHTS
Americans for Nonsmoker’s Rights (ANR) is a member-supported, non-profit advocacy group that has been working for 45 years, since 1976, to protect everyone’s right to breathe nontoxic air in workplaces and public places, from offices and airplanes to restaurants, bars, and casinos. ANR has continuously shined a light on the tobacco industry’s interference with sound and life-saving public health measures and successfully protected 61% of the population with local or statewide smokefree workplace, restaurant, and bar laws. ANR aims to close gaps in smokefree protections for workers in all workplaces, including bars, music venues, casinos, and hotels. For more information, please visit https://no-smoke.org/ and https://smokefreecasinos.org/.