“If You Don’t Want To See These Rallies Anymore, Hold A Hearing, Pass The Bill”

“When These Bills Hit The Floor, They’re Going To Pass With Flying Colors”

Atlantic City, NJ— As the gaming industry hosted its largest gathering on the east coast today, over 100 casino workers and advocates held a rally to protest a canceled panel discussion about smoking and to call on New Jersey lawmakers to take action on legislation to close the casino smoking loophole. Last week, the East Coast Gaming Conference (ECGC) canceled a panel discussion on indoor smoking after the head of the Casino Association of New Jersey (CANJ) abruptly backed out, prompting casino workers to bring the discussion to the doors of the convention. 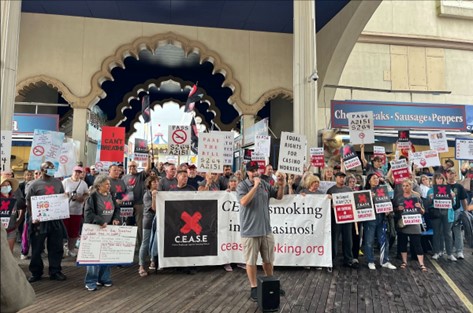 Following keynote remarks by Governor Phil Murphy, members of Casino Employees Against Smoking's Effects (CEASE) marched along the Atlantic City boardwalk with a clear message to lawmakers and industry executives: “No more waiting, pass the damn bill and get rid of smoking.”

“Every single day that smoking is allowed, the chances are less that I will be there for my two young sons and wife,” said Pete Naccarelli, Borgata dealer and co-leader of CEASE. “The CANJ has no logical argument on smoking and can’t publicly discuss this issue so they’re relying on lobbyists to spread arguments that no longer hold water. I really hope that our elected officials don’t get the wool pulled over their eyes by this garbage that the CANJ is throwing out there. This is an easy issue. There is a good chance that some of us here will get sick and possibly die because of the effects of secondhand smoke– that's the fact. The casino executives that sit in their smokefree offices don’t have to worry about this. No more waiting, pass the damn bill.”

“Here we are again begging for the same thing that every other worker in New Jersey has– fresh air in the workplace,” said Lamont White, Borgata dealer and co-leader of CEASE. “Is it a surprise that the CANJ pulled out? Is it a surprise that they couldn’t find one member from any casino to sit down and explain why it’s a good idea for us to breathe secondhand smoke? I want to thank the 65 lawmakers that agree with us and have cosponsored our bill. I also want to thank Governor Murphy for his statements of support. State leadership should listen to the governor and put our bills up for a hearing, and do it now. They must stop playing into the casino stall tactics and put our health first. We all know that when these bills hit the floor, they’re going to pass with flying colors.” 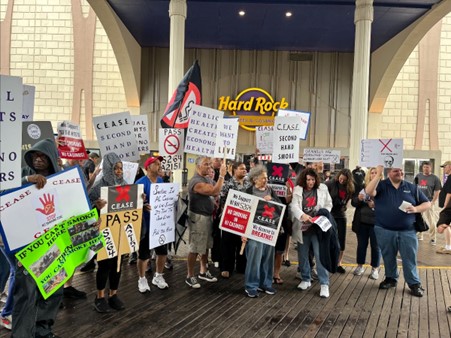 “It is true that casino workers are the only workers in the state of New Jersey that don’t have smokefree protections and that's why they’re out here again, in the rain, because the rain is less hazardous to their health than being in a room filled with secondhand smoke,” said Cynthia Hallett, president and CEO of Americans for Nonsmokers’ Rights. “There are 20 states that require casinos to be smokefree and over 160 Tribal casinos that have adopted smokefree policies. Why not AC? We’re here to implore legislators to schedule a hearing. We cannot wait any longer because everyday that we wait means more exposure. It means more lives at risk and unfortunately it may mean more lives lost. We have a majority of support from the legislators. Working together, we will get these bills moving forward, we will talk about the benefits of going smokefree, and we will potentially have to hold folks accountable if they keep delaying this bill. If you don’t want to see these rallies anymore, schedule a hearing.”

“The UAW proudly represents frontline workers at Tropicana, Ballys and Caesars and today we stand with our fellow brothers and sisters in support of these bills and in support of CEASE,” said Patrick Ashton of the United Auto Workers, the union representing Atlantic City casino dealers. “It's time to take the vote. We have a majority of legislators, we have the support of the governor. There are no more excuses, no matter if you’re a Democrat or Republican, the time is now.”

Background
With lawmakers returning to Trenton this month, casino workers and advocates for smokefree casinos are making clear that no worker should be subjected to breathing secondhand smoke. A2151 and S264, bills to close the casino smoking loophole and get rid of smoking inside Atlantic City casinos have earned extraordinary bipartisan support in both chambers of the state house.

The legislation is cosponsored by more than half of the legislature, including the entire Atlantic City delegation, a majority of the Assembly and Senate health committees, and a majority of South Jersey Assembly Democrats. Governor Murphy last week again expressed strong support saying, “At the end of the day, we will still get good business. Atlantic City is an American gem. We’ve got the ocean and the other competitors don’t. And this is the right thing for our respective health.”

This month, as the gaming industry recognizes Responsible Gaming Education Month, the leading organization dealing with gambling addiction is warning legislators that continuing to allow indoor smoking at Atlantic City casinos will only continue to encourage gambling addiction, but that passing bipartisan bills, S264 and A2151, to close the casino smoking loophole would help to address this concern.

Casino Employees Against Smoking's (Harmful) Effects (CEASE) is a group of thousands of casino dealers and other frontline gaming workers that formed after indoor smoking returned on July 4th and is fighting to permanently remove smoking from our workplaces.